Introduced as the most accurate and stable power analyser in the world,
Yokogawa has enhanced its industry-leading WT3000 precision power analyser
to produce the new WT3000E.

“The focus on renewable energy and the need to optimise efficiency and
comply with international power quality standards is placing ever greater
emphasis on the importance on high-quality measurements”, said Terry
Marrinan, Yokogawa’s Vice President, Test & Measurement, for Europe &
Africa: “As the world’s most accurate power analyser, the WT3000E provides
the necessary levels of precision to carry out these measurements, giving
R&D engineers an enhanced tool that is not only the benchmark for energy
efficiency measurement but also a reference for calibrating power measuring
instruments in standards laboratories.”

The specified 45 to 65Hz accuracy for the WT3000E is 0.01% of reading plus
0.03% of range. Unlike some other manufacturers’ specifications which may
appear to offer better accuracy, these figures are based on RMS values
rather than waveform peak values, confirming the superiority of the Yokogawa
instrument. Because power ranges are the multiple of the voltage and current
ranges, the actual power measurement error due to an uncertainty of 0.03% of
range in a WT3000E is less than 0.01% of range for a power meter based on
peak values, says the company.

These accuracy levels are important for testing devices such as solar
inverters, which are already working at overall efficiencies of 90-96%. To
increase the efficiency, even by a few decimal points, is a challenging and
important goal for the manufacturers, and the WT3000E provides the necessary
levels of precision to truly confirm even the smallest improvements in
efficiency.

The focus on sustainable and renewable energy has also raised the importance
and need for manufacturers to comply with IEC standards during their product
development. The WT3000E provides the flexibility to mix 30A and 2A input
current elements, which enables users to test the compliance of their
products with today’s harmonics, flicker and standby power standards in a
single instrument.

Like other models in the WT3000 Series, the WT3000E has a variety of
alphanumeric and graphic display formats, including the ability to display
the input signal as waveforms for easy analysis. It also offers high-speed
data updating which allows users to capture fast-changing transient signals
with high precision. Further analysis can then be performed using the
captured data. The WT3000E also includes as standard two features
previously only available as options: delta calculation and cycle-by-cycle
analysis. The delta calculation function allows users to calculate
individual phase voltages from the line voltage measured in a 3-phase /
3-wire system: an important feature for determining the phase voltage in
applications such as motor testing where there are no neutral lines.

Cycle-by-cycle analysis enables users to list the measurement parameters
such as voltage, current and active power for each cycle in a time series.
Input frequencies from 0.1Hz to 1000Hz can be measured, and up to 3000 items
of data can be saved in .CSV format. In addition, by using Yokogawa’s free
WTViewerEfree software, users can graphically display the data by cycle: a
unique method of capturing fluctuating transient power with high precision.

The 'guaranteed' accuracy and precision of Yokogawa instruments is verified
by tests carried out at the company’s European standards laboratory at its
European headquarters in The Netherlands. This facility is the only
industrial (i.e. non-government or national) organisation in Europe to offer
traceable power calibration, to national and international standards, at
frequencies up to 100kHz: a requirement for higher harmonic measurements
specified in quality standards such as ISO9000, says the company. 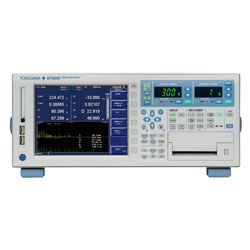