The new 3000T X-Series oscilloscope from Amplicon is the successor to the popular 3000A series. It expands on the established 3000A to create a new, high-quality test and research instrument, packed with additional functionality.

The 3000T is a 6-in-1 instrument with a 8.5-inch capacitive touch screen, bandwidth ranges of 100MHz to 1GHz, 5GSa/s (2.5GSa/s half channels) sampling rate, 4Mpts memory depth and an update rate of up to 1,000,000wfm/s, allowing detailed and precise waveforms to be displayed and allowing as much of the waveform as possible to be observed with little blind time, ensuring no important events are missed.

With the 3000T’s touch screen controls, users are able to perform many tasks that would otherwise be time consuming or cumbersome, such as setting up triggers. This is because zone touch triggering is possible, with the user simply dragging a box over the event they want to trigger, followed by the selection of the trigger type thereby reducing a long multi-step process into just two to three steps.

Alongside the high specification, which provides a clear and accurate display of incoming readings, the 3000T, a 6-in-1 instrument, gives users the ability to study their signals in greater detail and to carry out quick characterisation measurements without the need for additional instruments.

The integrated instruments include an MSO for mixed signal analysis, which provides 16 digital channels, where users can have up to twenty channels of time-correlated acquisition and viewing on the same instrument. A 20MHz function/arbitrary waveform generator with stimulus output and modulation capabilities along with the ability for users to create or edit waveforms with the built-in editor. There is also a 3-digit digital voltmeter (DVM), 8-digit counter, a protocol analyser with serial protocol trigger and decode options for SENT, CAN-FD plus others.

The 3000T has many features that are beneficial for research and analysis, such as having standard segmented smart memory, allowing for longer periods of time to be captured at high sample rates. This allows selective capturing to be done, so that users can capture only the signal activity and events that are important to them, says the company.

Rhys Murphy, product specialist, measurement and control, Amplicon, said: “We believe that our customers will immediately see the benefits of the 3000T with the new features that have been added as standard, providing great functionality and value for money.” 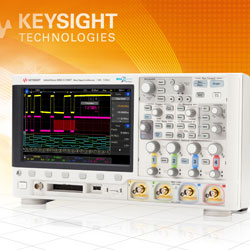