The intrinsically safe EE300Ex humidity and temperature transmitter, from E+E Elektronik, conforms to the European ATEX Directive and now also to the international IECEx and the FM classification specifically relevant to the USA and Canada. This makes the device suitable for worldwide usage in explosion hazard areas.

The EE300Ex was developed for use in explosion hazard environments and can be mounted directly in both gas and dust hazard areas of zone 0 / Div1. Precise humidity and temperature measurements from 0 - 100 %rel. hum. and -40 - 180C are also possible in applications under pressure up to 300 bar (4351 psi). Just as with humidity measurement in air, the EE300Ex can also be used for moisture measurement in oils.

Various models of the EE300Ex offer a high degree of flexibility. As a compact variant – with or without display – the transmitter can be mounted directly in the hazard area. With a remote probe, temperature classifications up to T6 can also be achieved. Depending on requirements, an EE300Ex model for combined humidity and temperature measurement or for temperature measurement only is available.

The two-part stainless steel housing (separate connection area and measurement unit) simplifies installation of the transmitter considerably. It also permits the rapid replacement of the measurement unit – such as for calibration – without time-consuming re-cabling.

The measured values are issued on two analogue outputs with 4 - 20mA. The power can be supplied via any intrinsically safe power supply device. In addition to the measured values for humidity and temperature, dew point, frost point, absolute humidity, mixing ratio and other calculated values can also be issued.

The configuration software permits customised configuration of the transmitter outside the hazardous area and permits, flexible, simple and rapid adaptation of the analogue outputs for the relevant application, says the company. 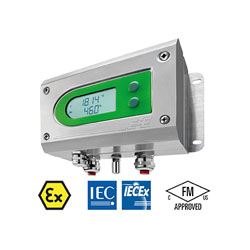