Electrically functional 2metal-level interconnects created with Ru semi-damascene, and airgap technology have for the first time shown an extended lifetime capability which is coupled with mechanical strength.

Nanoelectronics and digital technologies research organisation Imec analysis has confirmed the system-level benefits of this semi-damascene technology in terms of RC, power consumption and IR drop. Ru was also shown as a promising alternative for contact plugs in the middle-of-line of advanced nodes.

Ru, or to give it its full name, Ruthenium, is a rare transition metal belonging to the platinum group of the periodic table. Like the other metals of this group, Ruthenium is inert to most other chemicals. The element was discovered by Russian scientist Karl Ernst Claus in 1844 and named Ruthenium after Ruthenia, one of the medieval names for Russia.

Since its introduction about 25 years ago, copper dual-damascene in combination with low-k dielectrics has been the workhorse metal for lines and vias in both logic and memory chip applications.

According to Zsolt Tokei, a director of nano-interconnects at Imec, the major difference between dual-damascene and semi-damascene is the omission of the chemical mechanical polishing step of metal which is the concluding operation in a dual-damascene process flow.

Semi-damascene processing begins with the patterning of a via opening and etching it into a dielectric film. The via is then filled with Ruthenium (Ru) and over-filled, and the metal deposition continues until a layer of metal is formed over the dielectric. The metal is then masked and etched to form metal lines.

The true advantage of semi-damascene processing compared to single and dual-damascene is the ability to reduce variability and to form air gaps between the metal lines.

When combined with Ru as a conductor, no diffusion barrier between the dielectric and the conductor is required. This, according to Tokie, limits the capacitance increase at high aspect ratios which are seen as a major obstacle for improving the RC of interconnects when using conventional dual-damascene flows.

Higher aspect ratios are required for reducing the resistance and variability, but the undesired capacitance increase wipes out their positive effect. The use of semi-damascene modules with barrier-less Ru air-gaps can solve this problem.

This will allow interconnecting height increase which, in combination with airgaps as dielectrics, will potentially reduce the resistance-capacitance (RC) delay.

Imec says it has for the first time fabricated a 2metal-level semi-damascene module on 300mm wafers using Ru for the metallisation.

Devices with 30nm metal pitch line test structures showed more than 80% reproducibility with no evidence of shorting and a lifetime potential of more than 10 years.

In addition to that, the mechanical stability of the Ru air-gapped structures was found to be comparable to traditional Cu dual-damascene structures.

A complementary 12metal-layer analysis revealed for the first time the system-level benefits of the semi-damascene approach in sub-3nm nodes – using a 64bit ARM CPU as a benchmark design.

“The results show that semi-damascene, in combination with airgap technology not only outperforms dual-damascene in frequency and area, it also provides a scalable path for further enhancements. Airgap shows the potential to improve performance by 10% while reducing power consumption by more than 5%. The use of high-aspect-ratio wires can reduce the IR drop in the power network by 10 percent to improve reliability. Soon, a newly developed mask set for the semi-damascene module will allow us to improve the semi-damascene integration further and to validate the predicted performance improvements experimentally,” explained Zsolt Tokei

Imec has also shown the beneficial impact of using Ru as alternative metal in advanced MOL contact plugs – as a replacement for W or Co.

“Alternative metals such as barrier-less Ru have the potential to reduce further the contact resistance that results from shrinking the contact area. In a benchmark study, Ru and Co were examined. The results indicate that Ru is a promising candidate for replacing Co in narrow MOL trenches,” commented Naoto Horiguchi, director of CMOS device technology at Imec. 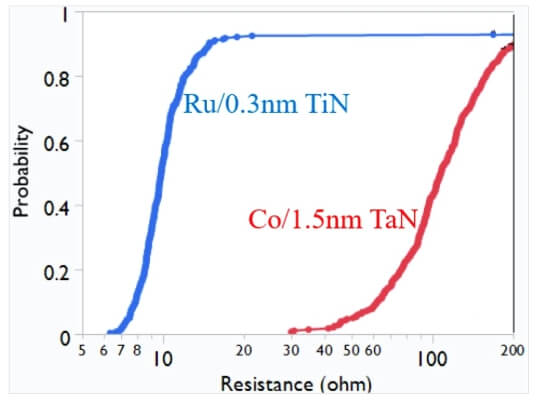 The resistance of a Ru filled via on a 0.3nm TiN liner (without barrier) was shown to outperform the Co filled equivalent process (with 1.5nm TaN barrier). Ru as a source/drain contact material was also demonstrated, with low contact resistivity in the order of 10-9Ωcm-2 on both p-SiGe and n-Si.