Half-bridge 15MHz Half-Bridge development boards that use eGaN FETs and high frequency synchronous bootstrap topology has been launched by California-based power specialists, the Efficient Power Conversion Corporation (EPC). The company says the EPC9066, EPC9067, and EPC9068 boards provide an efficient way for power systems designers to evaluate the performance of gallium nitride (GaN) transistors. They are configurable to a buck converter or as a ZVS class-D amplifier, EPC is a specialist in enhancement-mode gallium nitride based power management technology and was the first company to introduce enhancement-mode gallium-nitride-on-silicon (eGaN) FETs as power MOSFET replacements in applications such as DC-DC converters, wireless power transfer, envelope tracking, RF transmission, power inverters, remote sensing technology (LiDAR), and class-D audio amplifiers. The boards can produce a maximum output of 2.7A in the buck and ZVS class-D amplifier configurations. All the EPC boards feature a zero reverse recovery (QRR) synchronous bootstrap rectifier augmented gate driver to increase efficiency at high frequency operation, up to 15 MHz. Loss reduction is realised across the entire current range. The EPC9066/67/68 feature 40 V, 65 V, and 100 V-rated eGaN FETs. The boards are 2inch x 1.5inch and are laid out in a half-bridge configuration. Each one employs the Texas Instruments LM5113 gate driver with supply and bypass capacitors. The gate driver has been configured with a synchronous FET bootstrap circuit featuring the 100 V, 2800 mO EPC2038 eGaN FET, which eliminates the driver losses induced by the reverse recovery of the internal bootstrap diode. The boards have various probe points and Kelvin measurement points for DC input and output. In addition, they provide the capability to install a heat sink for high power operation. The operating load conditions, including configuration, of the development board determine the optimal design load voltage and resistance, resulting in a specific board’s performance. The device parameters for each board are given in the following table: Quick Start Guides, containing set-up procedures, circuit diagram, bill of material and Gerber files for the boards are available from the company. 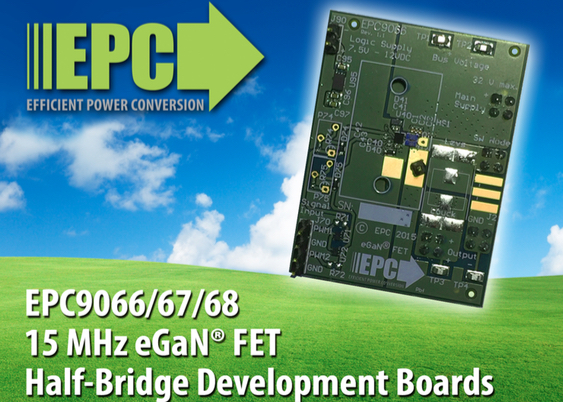 How Space-based Fabrication Can Revolutionise Manufacturing

5 things you need to know about antennas for wearable devices