Industry analysts reckon that by the end of this decade there will be around 50 billion connected devices operating worldwide. This Internet of Things, as this profusion of connectivity is often called, will mean that a monumental quantity of miniscule information packets will be zapping through cyber space and for us to take full benefit of it 5G wireless communications capability will be essential.

5G will create new frequency bands for wireless communications in the microwave and millimeter-wave ranges and these new communications channels will need precise test and measurement analysis. Channel sounding is the primary method of doing this according to Rohde & Schwarz (R&S).

A test solution relative to the envisaged 5G spectra comprising a signal and spectrum analyser, a vector signal generator and the new R&S TS5GCS test software has been developed by the company. 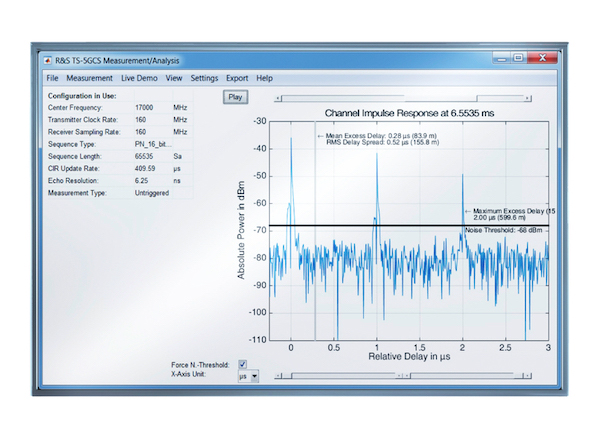 Using the new R&S TS-5GCS channel sounding software together with an R&S FSW signal and spectrum analyser and an R&S SMW200A vector signal generator makes it possible to measure channels in high frequency bands. The R&S SMW200A has a frequency range of up to 40 GHz and is used as the sounding signal source.

The R&S FSW operates as a receiver and can be employed with various frequencies and bandwidths. The R&S FSW85, for example, enables users to analyze sounding signals up to 85 GHz without an external mixer.

To measure wideband radio signals between a transmitter and a receiver the exact transmission path characteristics must be known. Channel sounding makes it possible to determine the impulse response of a transmission channel or mobile radio channel. The R&S TS-5GCS PC application software delivers the channel impulse response, which provides information about the influence of an observed channel on a given radio signal.

Possible influences on radio channels include signal echoes caused by reflections, shadowing from buildings and trees as well as weather-induced effects. The R&S TS-5GCS software is based on MATLAB and automatically reads the R&S FSW I/Q data. It correlates the received signal with the original calibrated sequence to provide the channel impulse response. Measurement data is displayed graphically.

Encapsulated 50A digital power module can keep its cool