The efficiency of power inverters is one of the most critical aspects of the design and a key feature for solar and wind applications. By Prasun Kulshrestha and Miguel Mendoza, Micrel.

The power inverter is a very common application for operating AC loads from a DC-operated battery system, mainly during a power failure. It is important that the power inverter gives a pure sine wave output so that the output does not damage any appliance that runs on it. The pure sine wave inverter has various applications because of its key advantages which include operation with very low harmonic distortion and clean power such as utility-supplied electricity, reduction in audible and electrical noise in fans and cooler running of inductive loads like microwaves and motors.

The DC could be from a battery source of 12 / 24 VDC. To convert this DC from a battery of either 12VDC or 24 VDC to AC voltage of either 110VAC or 230 VAC, multiple approaches of power conversion can be implemented. 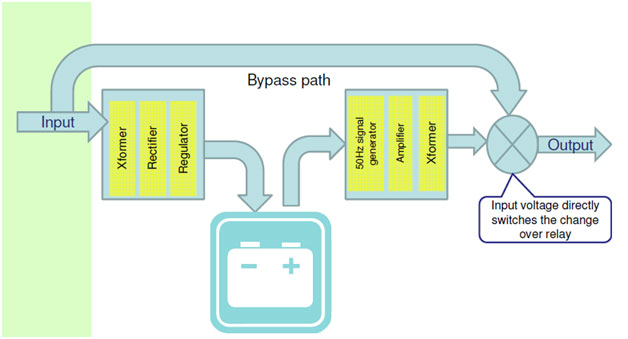 Figure1 illustrates the basic function of power inverter, wherein if an input AC power source is available, the AC loads would use the bypass path. Also, the battery gets charged. However, in case the input AC source is not available (during a power failure, for example) the battery DC power could be converted into usable AC power for the electrical loads connected at the output of the power inverter system. Usually the change over time should be equal to or greater than 10msec so that the output loads remain unaffected by the power cut.

A power inverter’s typical application is to convert battery voltage into conventional household AC voltage allowing the user to use electronic devices when an AC power is not available. There are basically three kinds of inverters. The first type of inverters made, which are now obsolete, produced a square wave signal at the output. An improved type of inverter was called the modified square wave inverter, also known as the modified sine wave inverter. It produced square waves with some dead spots between positive and negative half-cycles at the output. 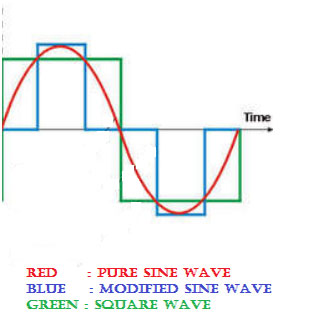 First, a DC-DC power module that has inbuilt inductor must be selected. In this example, we are using a 26V, 6A DC-DC power module that has a built-in inductor. The module incorporates a DC-DC controller, power MOSFETs, bootstrap diode, bootstrap capacitor and an inductor all in a single package. This high level of integration simplifies design and layout for designers. Additionally, this part delivers 93 percent efficiency for 12 V and 24 V input at light load. 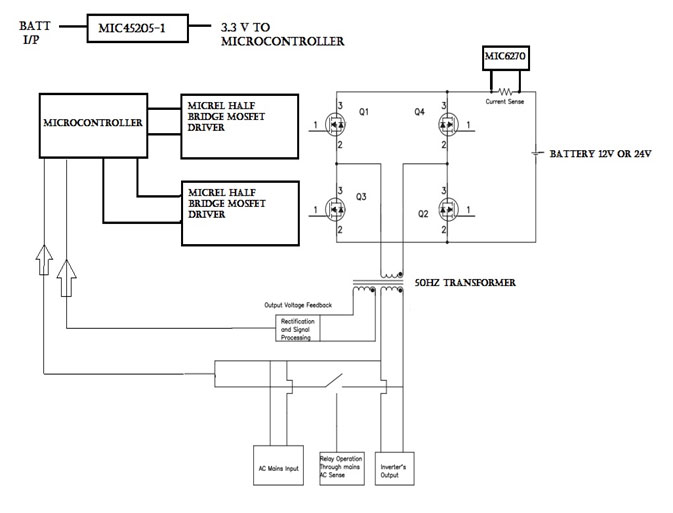 The power module uses less external components and provides a power inverter board a smallest DC-DC power supply. Figure 5 shows the schematic of DC-DC converter, which takes 12 VDC or 24 VDC from the battery and provides output in the form of 3.3V to the microcontroller, although the microcontroller would require only 150 to 200mA. 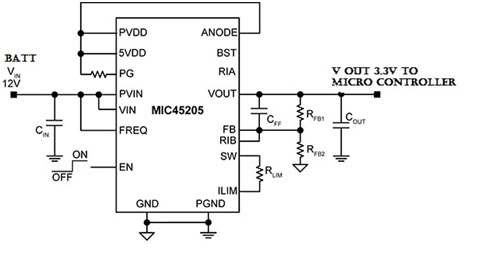 Figure 5. Schematic of MIC45205 power module with battery input and output going to the microcontroller

The gate driver is a power amplifier that accepts a low-power input from a controller IC and produces the appropriate high-current gate drive for a power MOSFET. The gate driver must source and sink current to establish required Vgs. The considerations for selection of a MOSFET driver for use in a power inverter application include:

The power inverter‘s most important requirement is that two MOSFETS in series should turn ON while the other two should remain completely OFF at any given time. If both MOSFETs pair on the side of half bridge while it is simultaneously ON, then VIN will short to ground. The high current from the shorted VIN supply will then “shoot through” the MOSFETS into ground. Excessive shoot through causes higher power dissipation in the MOSFETS, voltage spikes and ringing. To avoid this, usually inverter designers use software delay to avoid the turn on of those pair of MOSFETS simultaneously. The delay has to be selected cautiously and has to be written into a software program, which makes it complex. With the right half bridge MOSFET, shoot through can be avoided without making the system complex. 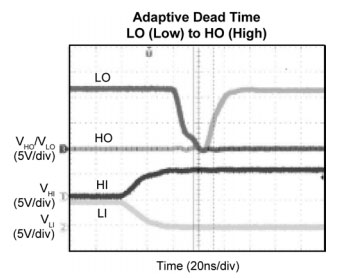 What are the ideal features of MOSFET drivers for a power inverter?

The same power inverter design and features can be used for solar or wind power inverters. The only difference is the input that would charge the battery. In solar inverters, sunlight is used by PV cells and is further converted to DC to charge the 12 V battery. Similarly, in the case of a wind inverter, wind is converted to get the relative DC voltage to charge the battery. The remaining inverter stage is more or less similar to the one we discussed above for pure sine wave. The overall efficiency in solar and wind applications are the most desired requirement. 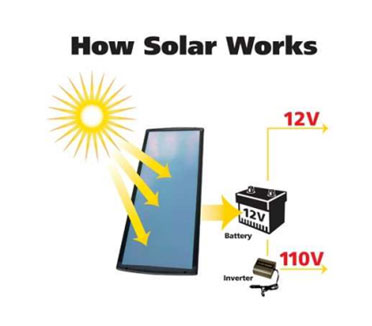 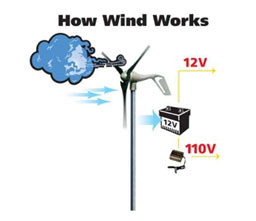 What are the distinctive requirements of a solar and wind power conversion?

Solar inverters may be classified into three broad types.

With the correct solutions for power inversion, designers can understand how the right power management devices are beneficial. Having features like shoot through protection and adaptive dead time allows designers to use hardware-defined delay. The system becomes more robust as the as shoot through can be avoided with hardware itself.

The most important aspect of power inverters, solar and wind inverters is the need for the most efficient system. Having a power module capable of delivering 93 percent for the rated load and the lowest quiescent current, the power inverter becomes more efficient.

Since most of the advancement in technology for power inverters are towards pure sine wave inverters, it is important to choose the MOSFET driver with most appropriate fall and rise time, inbuilt shoot through feature and current driving capability. 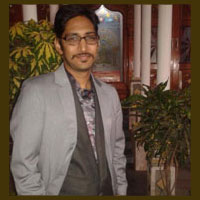 Prasun Kulshrestha - Prasun Kulshrestha has over 9 years of experience in the semiconductor industry. After spending 4 years in research and design development of SMPS based power supplies from 0.5 Watts to 410 Watts, he went on to work on 800VA sine wave power inverters for battery operated power back up applications. For the past 4 years he has worked for Micrel as Senior Application Engineer, based in Delhi, India in the company's power inverter business focusing largely on MOSFET drivers and power inverter design. He has core expertise in power and analogue electronics, and has designed a number of SMPS power supplies for various applications such as TVs, set top boxes, battery chargers, LEDs and DVD players, including non-isolated and isolated designs. Prasun holds a Bachelor Degree of Engineering in Electronics and Communications from the University of Nagpur, India. 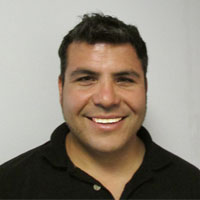 Miguel Mendoza - Marketing Product Manager, Linear Power Solutions - Miguel Mendoza has 14 years high tech experience in the semiconductor industry. He is currently based in Micrel headquarters in San Jose, where he is responsible for Automotive and Industrial Product Marketing for power management, MOSFET drives and LED driver solutions. Prior to coming to Micrel, Mendoza worked for several high tech companies in various roles, including as product marketing manager at Atmel and Maxim Integrated Products where he gained more than a decade in product marketing experience in interface products, LED backlighting for television and Solid State lighting. Mendoza graduated with a bachelor’s degree in Electrical Engineering from California Polytechnic University San Luis Obispo.

Micrel Inc., is a leading global manufacturer of IC solutions for the worldwide analog, Ethernet and high bandwidth markets.

What is green technology and examples of its benefits?