eCall. It could be coming to your car very soon

Following many years of proposals and discussions within the European Union, the EU-wide ‘eCall’ automatic-emergency-call alert system is now coming to a car near you. eCall is a system that provides an automated message to emergency services from a vehicle involved in a road accident, enabling ambulance crews and rescue services to reach the scene faster, potentially saving lives or reducing the severity of injuries.

Basically, an in-vehicle eCall System (IVS) terminal will make an emergency wireless call that carries both voice and data directly to the nearest emergency services. This will normally be the nearest 112 Public Safety Answering Point. eCall activation can be generated either manually by the occupants of the vehicle by pushing a button, or automatically via activation of in-vehicle sensors following a crash, for example. The voice call enables the occupants to talk with an eCall operator, while in parallel a ‘minimum set of data’ will also be sent to the operator. This data will comprise information about the incident including time, precise location, vehicle identification and information about a possible service provider. Importantly, it also provides the eCall status to indicate whether the system has been triggered manually or automatically in circumstances where the driver is unconscious or unable to make a phone call.

Very importantly, the European Parliament has now voted (April 2015) to implement a new ruling that all new cars and light vans sold within the EU from 31st March 2018 have to integrate the eCall system as standard. Based on recent numbers from the European Automobile Manufacturers Association (ACEA), more than a million new cars or light vehicles are currently sold per month across the EU. When added to the 250 million cars or more currently in use, the market potential for in-car eCall systems for new vehicles and after-market terminals for existing vehicles is very large. According to the European Commission, the aim is that the installation of the eCall system will add approximately €100 to the cost of a new car.

The key technical standards are already well defined, such as ETSI 126 267 that defines the eCall data transfer and In-band modem operation. Participating suppliers are already conducting interoperability tests across Europe such as the upcoming 4th eCall TESTFEST taking place in the Czech Republic during November.

A combination of technologies underpins eCall: position data from GNSS (Global Navigation Satellite System) and cellular technology that makes the voice/data call to the predefined 112 emergency number. In-Vehicle eCall System (IVS) terminals use an embedded eCall subsystem to monitor in-vehicle sensors for events such as airbag deployment and then automatically transmit location obtained via a GNSS receiver and initiate an automated, full-duplex voice/data call via a dedicated modem in case of an emergency situation. Today and probably for the next few years, the system is likely to operate using the US GPS satellite positioning system initially, but the European Galileo system will be an option once it is online.

While the decision by the European Parliament provides a major opportunity for technology providers at all levels of the supply chain for chip and module providers, software supplier, IVS makers and service providers, it will likely be a dynamic and changeable market, given the evolution of cellular and satellite technology options. Car makers, automotive OEMs and designers of IVS terminals will need to have a chip/module solution that is flexible and has the capability for easy upgradeability whatever the required cellular or positioning technology demanded by the eCall system. 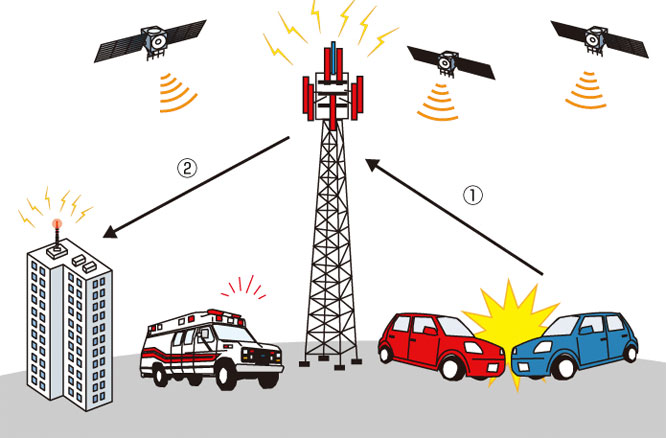 Sven Etzold is head of business marketing at u-blox, a company specialising in wireless communications and positioning semiconductors and modules for the industrial, automotive and consumer markets.