Zytronic has launched a contactless sensing option that is able to detect user interactions up to 30mm away from the surface of the glass. Based upon the company’s fully customisable ZyBrid touch sensors and developed completely at its UK R&D and manufacturing facility, ZyBrid hover has been created to help manufacturers of self-service kiosks in their efforts to assist customers nervous about touching publicly used surfaces.

The device hover works in together with the company's ZXY500 PCAP controller, which employs proprietary firmware to boost sensitivity levels beyond what is generally possible. Together with a specially developed touch sensor, this allows a significantly deeper touch-field to be generated. Furthermore, the multi-touch sensor can identify basic gestures (such as zooms, pinches, and swipes) even when the user is wearing thick gloves. It can also be set to operate in standard touch mode with direct user contact to the surface of the touchscreen.

From a practical standpoint, the company will advise developers of GUIs to adapt their software to assure an optimal user experience. This comprises tips such as increasing the size of icons to be touched and introducing wider ‘guard bands’ around each active button area. Both will assist in reducing the risk of accidental touches when interacting with adjacent controls.

“Current PCAP-based contactless technologies typically only support maximum distances of about 10mm from the surface of the screen, and generally cannot detect a touch from a gloved hand,” explains Dr Andrew Morrison, technical director at Zytronic. “This is because they rely on either ITO or a metal mesh to create the projected capacitive matrix on the rear of the sensor – and both have a relatively low conductivity. In contrast, for ZyBrid hover, we deposit a proprietary copper matrix pattern on the rear of our touch sensors, and together with our latest ZXY500 controller and custom firmware, allows us to detect changes in the transferred energy from further than ever before. This means that touch events can be registered at least 30mm away from the surface of the screen, even from a gloved hand.” 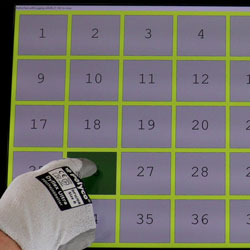