A new high-performance optical sensor that can reliably identify mirrored,
transparent, diffuse and other hard to detect surfaces has been launched by
Omron Electronic Components Europe.

The B5W light convergent reflective sensor detects target objects much more
reliably than general reflection photo sensors, even those that are often a
challenge such as reflective, transparent, diffuse or black surfaces. The
sensor's convergent light beam can be accurately set to trigger on the
presence of an object within a tightly specified target area, and ignore any
objects in the background or foreground. The B5W features a combination of a
cylindrical and a non-spherical lens.

The design of the B5W allows it to detect objects that are often a challenge
for traditional sensors. These include transparent cups and glasses in
vending machines, diffuse surfaces that scatter incident light like carpets,
black surfaces that absorb light and mirrored surfaces. A typical
application is a step detection function in a robot device. The B5W can
reliably distinguish wood, glass, carpet and other floor surfaces from a
downward step, to avoid risk of the robot falling, says the company.

The B5W can detect objects over a maximum distance of 70mm and provides an
analogue output signal. 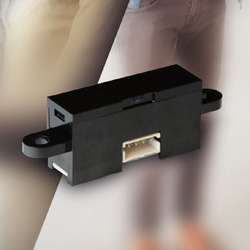