China is home to the world’s biggest market for smartphones, but until just a few years ago was largely dominated by models commonly referred to as 'shanzhai', or knock-off products. Now these low-cost, low-end smartphones are being superseded by mid-range and high-end models released by leading local manufacturers. In terms of operating systems and other software, the phones’ specs are comparable to one another, meaning differentiation must be achieved elsewhere. One way is by enhancing camera performance, says the company.

As of 2015, more than 90 percent of smartphones in the Chinese market have autofocus functionality. Of those, around 70 percent are fitted with lenses and camera modules supporting eight-megapixel resolution, while roughly 35 percent support 13 megapixels2 The shift in consumer preferences toward high-end smartphones is expected to continue with 13-megapixel models forecast to make up the largest market segment.

ALPS has responded by developing and starting mass production of the ATMC1Z9 Series Autofocus Actuator for Cameras supporting 13-megapixel resolution and realizing low power consumption as well as a low profile. The new product is the industry’s first bi-direction type actuator for 13 megapixels. It realizes power savings, consuming around one third of the power used by existing preload type actuators, and enables high-speed focusing. And with dimensions of 8.5mm × 8.5mm × 2.8mm, the actuator has one of the slimmest profiles in the industry, contributing to greater flexibility and quality in casing design.

Bi-direction type actuators set the initial position of the lens at a frequently used focal distance (position) and adjust focus by moving the lens from that point in one direction or the other (bi-directionally) depending on whether the current is positive or negative. This shortens the distance the lens has to travel, thereby reducing the amount of power required to move the lens and enabling high-speed focusing.

To be able to stop and start movement of a suspended lens while still managing to restrict lens tilt requires a high degree of precision in flat spring assembly. ALPS achieves this using mould design, simulation and automated machine design technologies. Lens tilt is less than one tenth of a degree during lens drive, says the company. 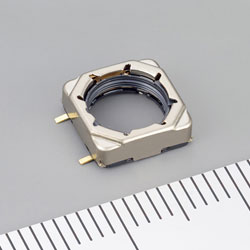