Keysight Technologies has introduced what it believes to be a world first - a 50GHz frequency extension to the M9393A PXIe performance vector signal analyzer (VSA), providing frequency coverage previously unseen in modular instrumentation. With coverage of Ka-band frequencies and beyond, the M9393A delivers Keysight’s proven millimetre wave (mmWave) measurement technology in a PXI form factor for manufacturing and design validation of modems, transponders and sub-components for commercial and defence satellite communications.

The innovative design of the M9393A offers engineers the ability to validate the performance of Ka-band designs with continuous frequency sweeps from 3.6 to 50GHz (option FRX) and direct access to 800 MHz of IF bandwidth (option WB1). With displayed average noise level (DANL) better than -155dBm/Hz at 40GHz and accelerated sweep speed, the M9393A provides the fastest low-level spur searching capability on the market. The compact, modular form factor allows for dual channel configuration in a single chassis for increased measurement density and time synchronous multi-channel radio frequency measurements.

The M9393A’s extremely low noise floor in Ka-band, combined with Keysight’s 89600 VSA software enables measurements of 20GHz of spectrum with -110dBm DANL, in less than 10 seconds, for the fastest measurements of low-level harmonics and spurs. This fundamental test is not only a regulatory requirement, it is a key indicator of system performance, and often a bottleneck in testing. In the past, this measurement has required the test engineer to tradeoff coverage and time, with tests taking minutes to hours. The M9393A’s frequency sweep speed eliminates this tradeoff and allows developers to track minute signal distortions that were previously not practical to examine. 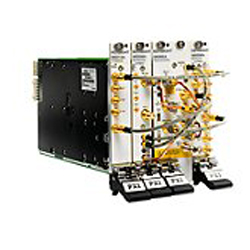