Cameras incorporated into smartphones are increasingly high-performance and models allowing high-resolution photography that stands comparison with compact digital cameras have been on the rise in recent years.

Generally speaking, for a device to take sharp, high-resolution photos it requires a powerful image sensor, as well as a large-diameter imaging lens for collecting as much light as possible. At the same time, smartphones require their electronic components to help save battery by consuming little power.

Responding to these challenges, ALPS has developed the ATMJ1Z7 Series Bi-direction Type Autofocus Actuator, which supports both large-diameter lenses and low power consumption. The ATMJ1Z7 Series is available in two types, supporting large lenses with a diameter of either 7.05mm (for 16-megapixel resolution) or 8mm (for 20-megapixel resolution). Both types have the same specs and dimensions of 10mm × 10mm × 4.3mm. This makes it easy to switch to the larger lens, helping to reduce the design workload.

In addition, whereas existing lens-drive actuators are preload types, driving the lens in only one given direction (uni-directionally) using a positive current, the ATMJ1Z7 Series sets the initial position of the lens at a frequently used focal distance (position) and adjusts focus by moving the lens from that point in one direction or the other (bi-directionally) depending on whether the current is positive or negative. This shortens the distance the lens has to travel, thereby lowering the amount of power required to move the lens.

Furthermore, original mold design and automated machine design technologies have been applied to put in place a high-quality production system with extremely low variance. High precision is also realized, with a tilt of less than one tenth of a degree during lens drive, says the company. 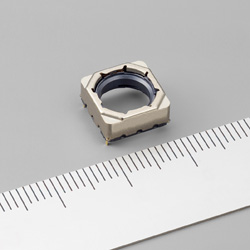