On board the low-energy escalator

Since the mid-2000s, designers of external power supplies for computers and consumer electronics have come under increasing legislative pressure to make their designs more energy efficient. The drive for efficiency first emerged as the result of research into the main sources of energy wastage from electrical devices.

By the end of the 1990s, there were an estimated one billion products in operation in the US alone that spent much of their time plugged into a mains socket. For reasons of cost and design simplicity, most of them employed linear conversion techniques that delivered efficiencies as low as 50 per cent when active and would continue to draw significant amounts of power - more than 1W apiece - even when the loads they were designed to power were inactive.

The first attempts to deal with the problem were voluntary. Over the past decade, mandatory legislation has come into being and has been progressively tightened, with the most stringent regime being that of the US. Tighter rules for the EISA 2007 were drawn up by the US Department of Energy and came into force in February this year [2016].

The more stringent EISA 2007 rules correspond to Level VI of the International Efficiency Mark (IEM) scheme developed under the DoE's Energy Star programme. The IEM scheme provides a useful basis for comparing different efficiency rules around the world, as it has been adopted by numerous governing bodies. For example, the European Union adopted a code of conduct in 2011 that has a high level of commonality with the Level V efficiency rules. That standard followed on quickly from Tier 1 of the Energy-related Products (ErP) Directive that came into effect the previous year. The original directive is regarded as being a Level IV standard. Although the European code of conduct is voluntary, to ensure they have products they can sell internationally, it makes sense for electronics manufacturers to design to the most stringent standard, which is now Level VI.

The DoE estimates that the cumulative effect of replacing older devices with those based on the progressively tighter requirements over the next three decades will cut energy consumption in the US alone by 93 billion kilowatt hours. Consumers will benefit directly, saving a total of $300m per year compared to the situation without such efficiency standards. One of the most significant changes between Level V and Level VI is the introduction of a more stringent requirement for the no-load conditions of lower-power adapters. The allowable power under no-load conditions drops from 0.3W for sub-50W AC/DC adapters to just 0.1W. The difference in energy consumed during a year if the adapter is left plugged in and switched on but unused is enough to charge a smartphone one hundred times.

Power supply manufacturers indicate compliance by placing a Roman numeral corresponding to the appropriate level on the power supply’s regulatory label as specified by the International Efficiency Marking Protocol for External Power Supplies Version 3.0, providing an easy way for consumers and buyers to check. 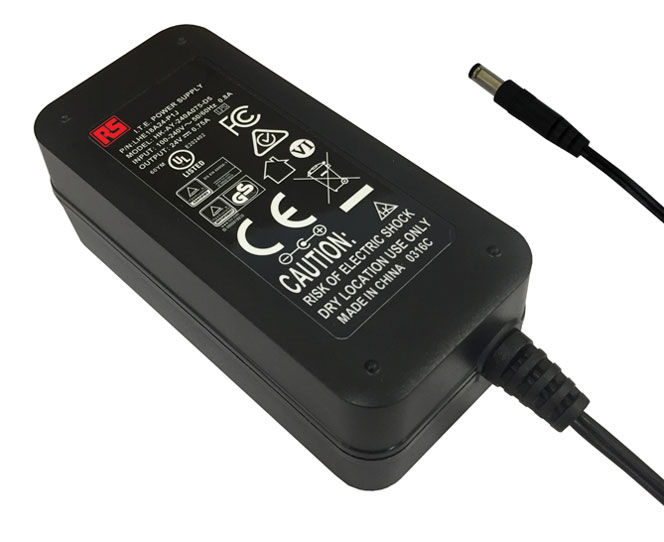 The main focus of the European ErP Directive was to deal with concerns about ‘vampire’ power drain by the many consumer electronics devices scattered around the home that were plugged constantly into live mains sockets. Power supplies used many systems prior to the introduction of energy-focused directives that were not designed to shut down when the system they powered was quiescent and so needed little or no power itself. The power supplies for these devices, many of them external power supplies that run a low-voltage DC cable to the actual electronic devices, would continue to run as though they were feeding an active load. They could often consume 1W or more, resulting in significant energy consumption over the many hours they might be plugged in at the wall sockets. The Tier 1 European regulations specified that from 2010 the no-load consumption should be no more than 0.5W, but with the shift to the next tier, also known as Level V, in 2011 the limit fell to 300mW for adapters with an output less than 51W.

The European Commission also added a classification covering the external supplies used for charging mobile devices that consume, when active, less than 8W. From 2014, following the introduction of version 5 of the EU’s Code of Conduct, the supplies had to limit no-load power consumption to less than 75mW.

In the multiple shifts from Level III to Level VI compliance, active-mode efficiency requirements have steadily increased. A Level IV power supply with a load requirement of more than 51W, up to a limit of 250W, needed to be 85 per cent efficient or better. Level V pushed that to 86 per cent. Level VI tightens performance thresholds further to 87.5 per cent for single-voltage supplies operating between 51W and 250W when their load is active. Level VI also brings in requirements for even higher power units and those that support multiple output voltages.

To support these increasingly stringent standards, power supply designers have had to use a number of techniques to improve efficiency. The results can be seen in external power supplies from manufacturers such as Mean Well, TRACOPOWER and XP Power, as well as RS Pro. For custom external power supplies, which will be common in multiple-output units, designers need to look at both the energy efficiency improvements made possible by advanced switched-mode power conversion techniques, as well as load detection, to cut the output current to the bare minimum when power is not needed. 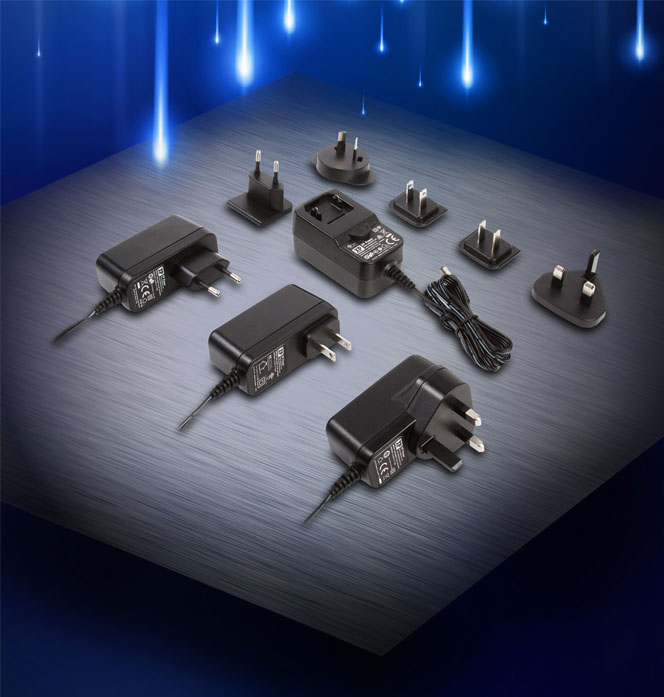 Some intelligent modern power supplies. A wide range is available at RS

Intelligence in the power adapter is the key to efficient handling of no-load conditions. One technique to save power under low-load conditions is to switch to a different power-conversion strategy based on a threshold. Above the threshold, during which the load is most active, the converter runs in its normal ‘continuous’ conversion mode. This mode normally involves some form of switched-mode delivery of AC power to the DC side regulated by pulse width modulation (PWM).

With PWM, a controller tracks the output voltage of the converter to check that it stays within range. The controller in response changes the amount of charge allowed from the input to the output during each switching cycle. The charge depends on the length of the pulse. For most converters, under normal operation, the pulses are generated at a constant frequency. But this can lead to excessive activity when the load needs little or no power.

In response, power-conversion controllers such as the ON Semiconductor NCP1271 introduced modes that go under the name of ‘sleep’ or ‘pulse-skipping’. When the load activity reduces, the drop-off in current demand leads to the PWM controller starts to drop pulse cycles rather than supply excess energy that will be wasted. If the load restarts, the voltage drop caused by the increased energy demand causes the active PWM mode to take over. If the load remains quiescent, it makes sense to move to a very low-duty cycle mode. After a hundred or so skipped cycles, the power controller can move into a power-down mode that disables switching entirely, restarting once the sampled output voltage drops below a limit.

The decision by many manufacturers to use USB as the connector for both power and data provides another way of detecting the presence of an active load – and to disable the power supply if the end device is disconnected. A common technique is to tie together the USB ground and shield signals when a USB cable is inserted. A microcontroller in the power supply can detect this condition by monitoring an input line that is coupled to a pull-up resistor. When no device is connected, the pull-up resistor generates a high logic level. The connection to ground when a USB device is attached pulls the logic level down.

As the power supply is inactive during this time another source of energy is needed. Typically, this is a supercapacitor. Periodically, the supercapacitor will need to be charged but this is easily achieved by monitoring the capacitor’s voltage. When it passes a threshold, the converter operates for a few cycles and then returns to sleep.

To go further and prepare for even more stringent legislation, another source of energy saving comes from the X-capacitor that is normally fitted to AC adapters to discharge energy safely as heat when they are removed from the wall socket. When the adapter is connected to the AC socket, the capacitor wastes some current through the safe-discharge network. The CapZero developed by Power Integrations deals with these losses by disconnecting the X-capacitor from the supply while the adapter is plugged in, switching the capacitor back in when the AC voltage is removed.

Whether incorporated into packaged adapters or available as components for a custom solution, the components industry has reacted to each tightening of energy regulations no matter which world region is driving the move because of the need to support products that can be sold globally. The next level of regulations will doubtless drive a further wave of innovation.

Tim Peberdy is the Global Product Manager for power supplies, power inverters and DC/DC converters at RS Components. He joined RS in 1993, and is responsible for leading product and supplier strategies, identifying new technologies and suppliers, and managing product lifecycle across the power product ranges. Tim has more than 30 years' experience in the manufacturing and distribution of electrical and electronic components.

Can this SiPh transceiver technology satisfy the bandwidth-guzzlers?

How 2D Perovskite Photovoltaics Could be Improved