Back in June last year I wrote about high-flying drones and the danger they represent to aircraft, a fact supported by the numerous near misses being reported. In the USA last year there were 175 of those in a six-month period and during 2016 in the UK there were 16 near misses that occurred around airports. So the good news this week for drone-jockeys and airline passengers is that a major drone manufacturer has incorporated an early warning collision system into its drones that warn the drone operator when there is an imminent danger of collision with planes and helicopters.

And now the bad news. A man in the USA has been jailed for knocking a woman unconscious with the drone he was operating. Albeit the incident was an accident when the drone struck a building and then fell on the unfortunate woman. However, an American court saw it as reckless endangerment and promptly handed the drone-jockey a thirty-day spell in the slammer!

So the US justice system is clamping down on irresponsible use of drones and would undoubtedly raise hell if anything endangered or damaged a US aircraft, no matter where it was flying.

But back to the very welcome safety system that could keep drones away from aircraft. The M200 series of drones are using automatic dependent surveillance broadcast (ADS-B) receivers that can pick up broadcasts from flights.

ADS-B is a system whereby aircraft automatically broadcast their exact position. The acronym stands for Automatic because it does not need pilot input, Dependant because it depends on accurate position and velocity data from the aircraft’s navigation system, Surveillance because it provides aircraft position, altitude, velocity, and other surveillance data and finally Broadcast, because information is constantly broadcast.

So who actually uses this information? It is intended primarily for other aircraft and air traffic controllers to ensure that aircrafts’ positions are accurately known. It is also used by the many aircraft tracking websites used by the public.

It works by the aircraft calculating its position using GPS. The information is then broadcast by a transmitter twice a second on a 1090MHz digital data link.

So with this system drone-jockeys would get adequate warning of an aircraft’s position and be able to move away. But there are some aspects to all this that could create a false sense of security. The concern is that ADS-B content is not encrypted and can therefore be at risk of hacking. Much work is being done on this and encryption algorithms that could secure the system are under investigation. A key consideration in that work is to avoid any possible danger that could result by encrypting the system’s information. The point here is that as the current system is open in concept the safety information is readily available and unambiguous. Encryption would by its very nature curtail that openness and this is the operating characteristic that is causing some worries about safety. However, authorities have made it clear that no encryption system would be adopted that would jeopardize safety, Another concern regarding ADS-B is that not all aircraft use it so drones would not automatically pick-up on those and near misses airports could still occur.

But all that aside here is no doubt that the inclusion of ADS-B receivers in the M200 drones is a very positive move when it comes to drone related safety.

However, drone jockeys here in the UK would still do well to adhere to one of the Drone Code notes published by the Civil Aviation Authority. That states quite simply that drones should stay below an altitude of 400 feet and that any drone operator endangering an aircraft is at risk of winning themselves a five-year prison sentence. 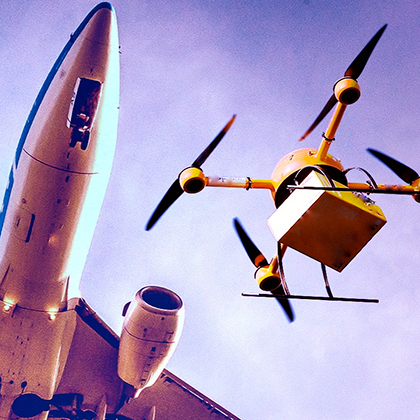